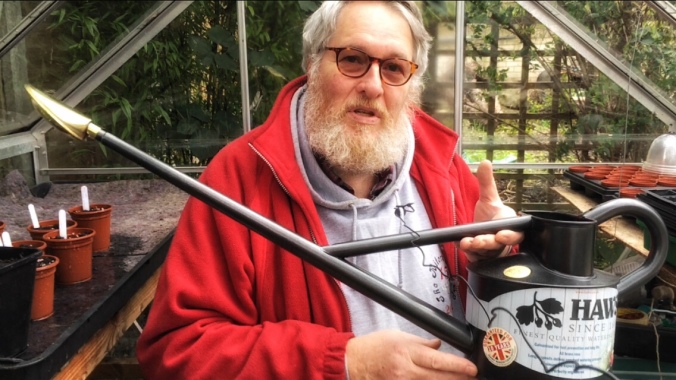 We were finally able to make it down to the greenhouse on the Easter weekend. But have our new tubers survived the long wait to be planted?

Major works at home kept us occupied for most of March. Not only that, snow and freezing temperatures made visiting the plot or the greenhouse even for a short while impossible. As a wheelchair user, Andrew can’t move around as readily as most of us, which means that his body temperature drops fast – something he’s not always aware of until it’s too late, which can make him very unwell.

And so the plants and tubers we ordered have had to wait – some survived better than others.

Our seed potatoes are chitting away quite happily next to the kitchen window. But we lost a rhubarb which arrived in early March and wasn’t happy on our windowsill.

Luckily, Richard Anderson, of Anderson Landscapes, who allows us use of his greenhouse had cleaned it all out for us so we were able to get going immediately. Thanks, Richard! (Please show him some love by visiting his website. He is a fantastic landscaper.)

You can see how we got on in our latest video:

First off, we planted some unusual tubers. Following the success of our oca, we looked to see what else we could try and decided on mashua (Tropaeolum tuberosum) and Chinese artichokes (Stachys affinis, also known as crosnes), both of which we got from Pennard Plants. 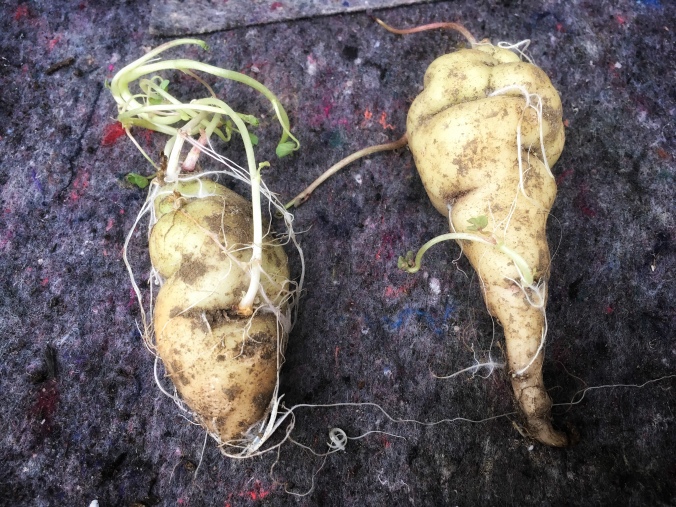 Also known as the Peruvian ground apple, this is another South American tuber. They are meant to be easy to grow but need to be placed next to something like a wall for support.

They are one of the highest yielding Andean tubers with a high resistance to insect, nematode and bacterial pests. Apparently, they can be used as companion plants for potatoes because of their pest-repelling qualities.

In terms of eating, the tubers contain mustard oils which gives them a peppery flavour. They are versatile and can be eaten raw or cooked as you would a potato (which softens the peppery flavour).

Also known as crosne, Japanese artichokes or chorogi. I can’t help feeling that these look like something you might be asked to eat in a bushtucker trial!

Apparently, these are perennials. Once established, you leave a few in the ground as you harvest and they self perpetuate.

The tubers are meant to have a delicate nutty flavour and can be eaten raw, lightly fried in butter, stir fried or pickled.

We’d like to say a big thank you to Haws for the lovely long-reach watering can which is now in use in the greenhouse. We had great fun helping them with some market research. You can see the can in action in our video.