With Burns Night looming, a visit to the plot to collect some potatoes was quickly becoming necessary.

We leave our crops in the ground until we want to use them. This can increase the exposure to pests and diseases but we find they just last better this way, probably because we have a well drained sandy soil.

So off to the plot on a wintry afternoon, dry but cold. 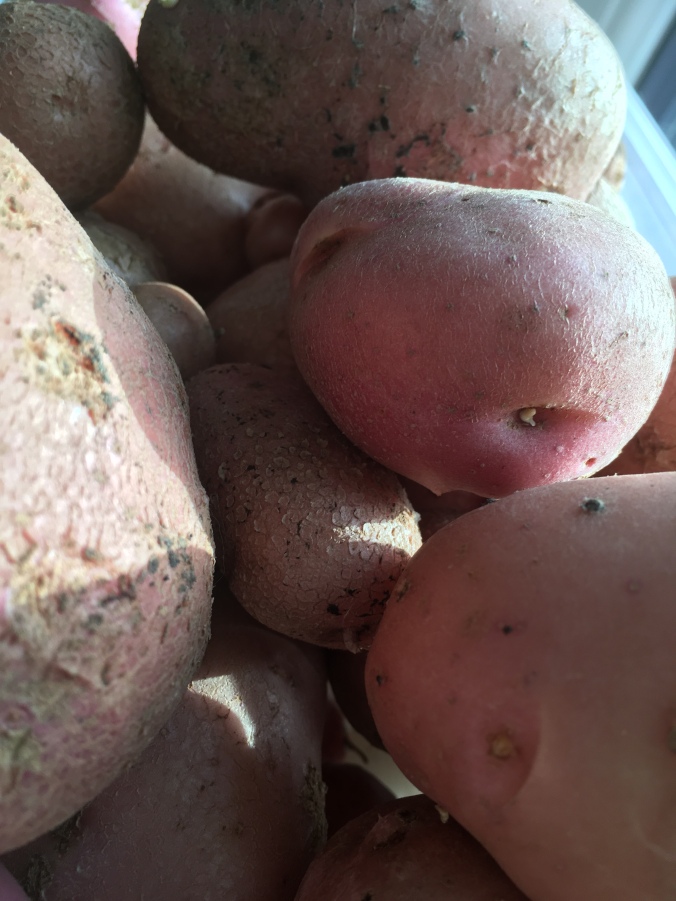 By the time I had enough potatoes, I became aware that a light drizzle which had set in not long after I arrived was turning into snow. I could see that my shoulders reflected in the shed windows turning white.

Ok, I thought, since I’m already wet and cold I can do this for a bit longer and harvest other crops.

One of the vegetables new to us in 2018 was Chinese artichoke, Stachys affinis. 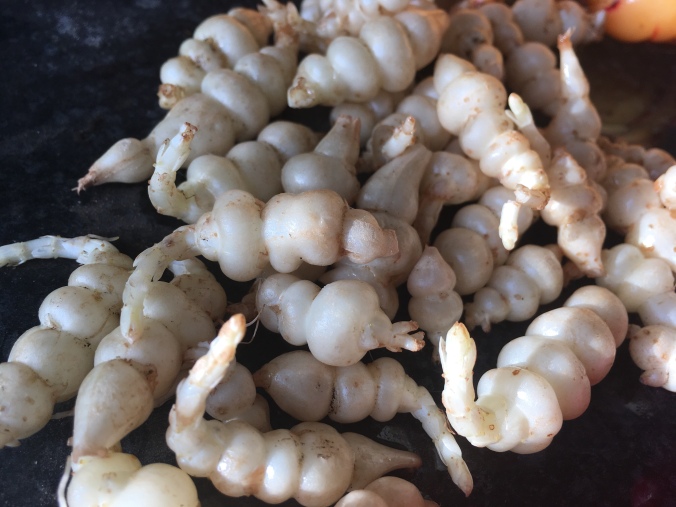 We were not very successful with this plant, losing a few to the early dry weather and ending up with only two plants, one of which grew less vigorously. I decided to harvest this smaller plant.

These tiny tubers look alarmingly maggot-like. They are fiddly to clean but worth the effort. Eaten raw they taste a bit like a mild hazelnut with a slightly softer texture. We roasted ours, putting them in the oven along with other roasting vegetables for the last 15 minutes. The nutty flavour is reduced by cooking, but they are still tasty.

Having tried the ones in the picture, we will save any harvested from the other to plant for the coming year – our third growing year.

We successfully tried oca in our first growing year, and saved some of the scarlet beauties for replanting. 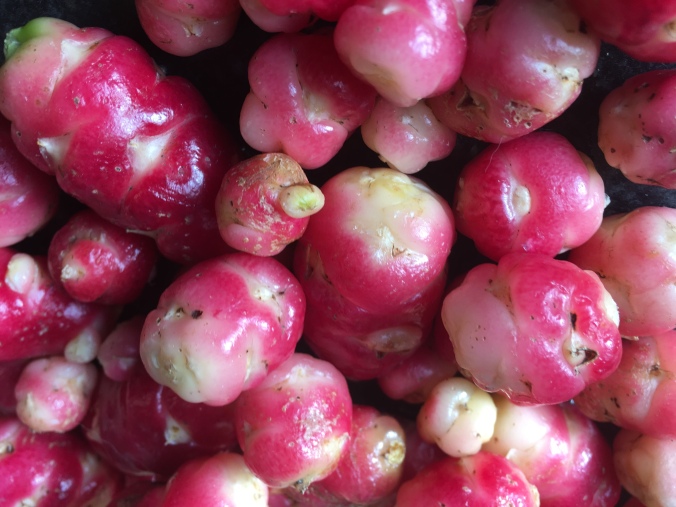 As a vegetable, oca are difficult to find in the shops. You can buy them from online-supermarket Ocado @ £27.95 per kg (price on 23 Jan 2019). Buying them from seed merchants, each tuber costs around £1 although some can be found @ £2.99 for five. So, growing them yourself can be rewarding.

We harvest around 400g per plant and they are not difficult to cultivate. With that in mind, having been successful with the reds last year, we thought we’d try a yellow variety. 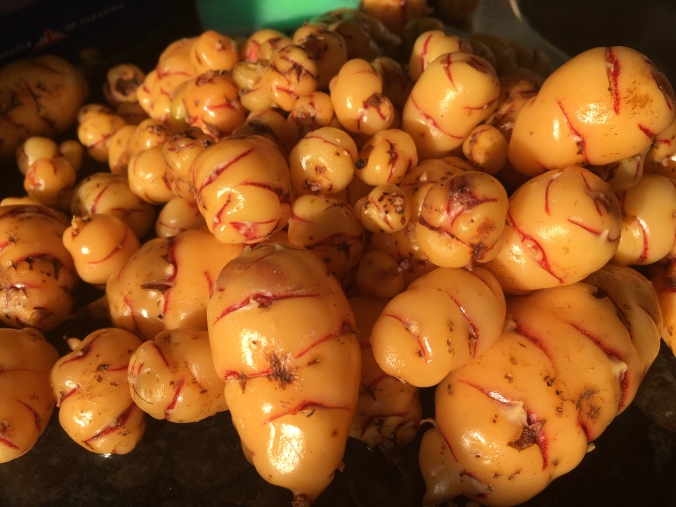 The yellow produced lots of very small tubers along with fewer larger ones. Again, worthwhile and very tasty. Cooked, oca are like lemony potatoes – if anything, the yellow ones had a more intense, citrus-like flavour.

Another plant we grew but yet to harvest is mashua. 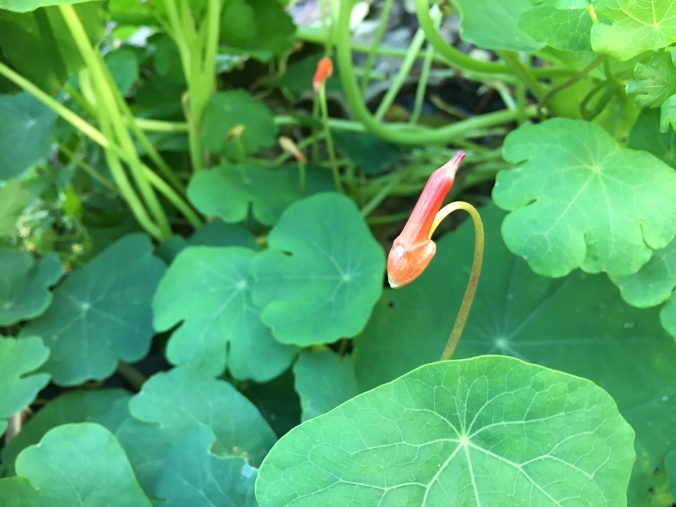 Part of the group of plants known as nasturtium, this perennial is grown for the tubers that develop in the soil.

Again, these tubers are expensive, costing us around £7 or £8 per tuber – so we got two to start with.

It’s a vigorous climber. We planted them against our perimeter chain-link fence. 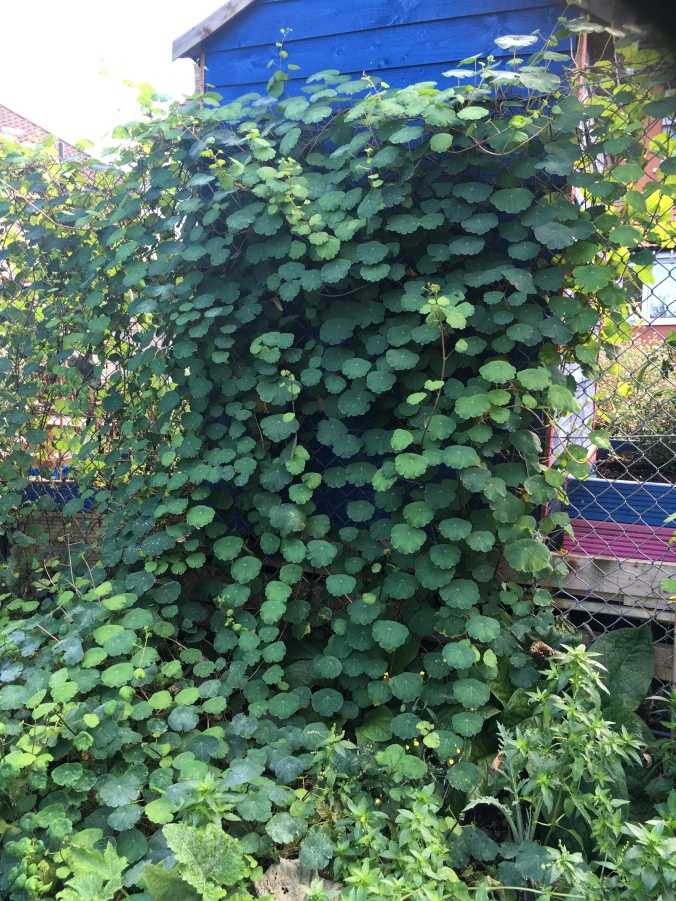 Mashua about halfway through the growing season

The one pictured played the game and grew up and along the fence. The other made a half-hearted effort to grow upwards, before spreading itself over the majority of the plot.

I’m hoping to harvest these in the next week or so. Look out for more about the mashua once we have tried them.